By RT
A Satanic group is scheduled to hold a “black mass” at the government-owned Oklahoma City Civic Center in August, prompting more than 107,000 people to sign an online petition demanding that the event be cancelled.
Shocking: This Book Is A Best Seller On Amazon

Dakhma of Angra Mainyu, a Satanist group co-founded by registered sex offender Adam Daniels, is set to hold a so-called black mass at a performing arts center in Oklahoma City on August 15. 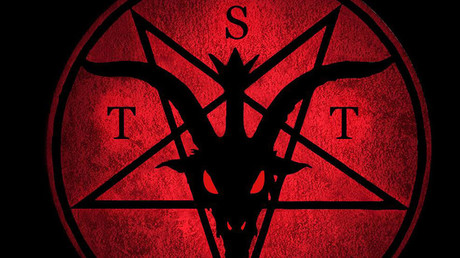 Satanic Temple rejected by Phoenix gets OK from Scottsdale

“The consumption of the Mary by Jai Kali Maa, is an event that will have two seperate [sic] rituals that will show the evolution from Satanism to Ahrimanism. The first ritual will [be] the black mass as done in 2014, and the second ritual will be the consumption of Mary by Jai Kali Maa. The second ritual will educate the public on the practice of Ahrimanism,” the description of the event says on Oklahoma City Civic Center’s upcoming shows page.

A traditionalist Catholic organization, Tradition, Family and Property (TFP), said in the petition that the black mass “offends more than 1 billion Catholics worldwide, 200,000 Catholics in Oklahoma and countless more God-loving Americans,” calling for the city to cancel it.

“Every Black Mass is a direct, deliberate and sinful act of hatred against God. Often, a Consecrated Host is stolen from a Catholic Church and then used to desecrate, mock and insult the Catholic Mass,” the petition states. “The Person of Our Lord Jesus Christ is attacked in a most vile and unspeakable manner. These insults against God are not only offensive to Christians, but also repulsive to everyone of good will.”

The event is a follow-up to a 2014 ritual, which was also held by Dakhma of Angra Mainyu at the same city-owned property in Oklahoma’s capital, that sparked similar outrage from Christian groups.

“I’m very glad that we get the opportunity to share with people what Satanism really is and not Hollywood portrays it to be,” Daniels said at the time, according to Gospel Herald. “They like to say Satanists get together and sacrifice animals and people, and that’s not what we do.”

That event went forward despite opposition, but a police presence was necessary to separate protesters from attendees out of fear of legal reprisal.

“If we had cancelled the event, we would likely have been sued by the ACLU, whom we know was watching the case very closely,” Jennifer McClintock, a spokeswoman for the Oklahoma City Department of Parks and Recreation, told the Christian Post in 2014. “In the past, when the City has attempted to interfere with an individual’s free exercise of speech on our property, we have been taken to Federal court. We have lost each of those cases at our taxpayers’ expense.”