At the top of the list of the Jews behind DHS is:

The Chertoff Group is the primary consultant to Homeland Security, staffed by former DHS officers with Jews holding the highest positions as principals, senior advisers, top staffers, and ‘experts’ on national security.

Indeed, all of these JEWS at the Chertoff Group are current advisers to DHS.

And, of course, there’s all the Gentile shills like Michael Hayden whose fat paychecks signed by Chertoff are solid evidence that they’ve sold their souls to the Jews.

At the same time, loads of Jews staff Homeland Security itself. Noah Kroloff, a Jew at Chief of Staff was just replaced by another Jew, Amy Shlossman.

The chief diplomatic officer at DHS is the Jew, Alan Bersin.

And two Jews: David Heyman and Alan Cohn, are heads of policy. Yes, “policy” at Homeland Security is led and shaped by Jews.

So NEXT TIME you hear all the ‘truthers’ at infowars complaining about Homeland Security’s “policy” then quickly chime in with: Did you know that JEWS shape the “policy” at DHS?

(Jones will likely BAN you from ever posting again on his site for simply stating the facts.)

Chertoff enjoys the dubious distinction of being awarded a multi-million dollar contract by Congress to put hundreds of RapiScan “porno-scanners” in TSA lines throughout our nation’s airports. 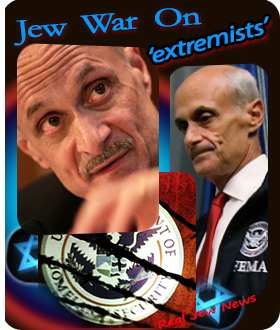 In 2012, Chertoff was appointed head of the US division of BAE Systems, Europe’s largest weapons-maker, seeking via his influence a bigger piece of the Pentagon’s budget pie.

As the primary consultant to Homeland Security with advanced weapons now at his disposal, we can clearly see the fruit of Chertoff’s consulting services.

Owing to Chertoff’s counsel, Homeland Security has purchased enough bullets, weapons and armored vehicles to wage a 7 year war on the American people.

Don’t be fooled. Janet Napolitano, an alleged lesbian who Alex Jones calls “Big Sis,” is nothing more than Chertoff’s puppet.

Chertoff and his fellow Jews along with high-ranking Jews within DHS wield all the power necessary to grease the gears at America’s Cheka Unit known as Homeland Security.

And these same Jews who run the federal police are slowly but surely absorbing the local police as well…all in the name of fighting extremism NOT ‘terrorists.’ And that’s scary…

‘Flying this week might make you reconsider your decision to ever leave home. While the federal government scrapes together the cash to hire the 6,000 new TSA workers needed to get the airline industry through the summer travel season, airports are telling passengers to suck it up and wait. And wait. And wait.

Why are security lines such a mess? It’s simple math, really. More people are flying—some airports are seeing up to 15 percent more passengers compared to last year. Meanwhile, TSA has been slow to allocate the funds needed to hire more staffers to shuffle everyone through those Rapiscans. New York airports are threatening to hire an outside agency to run its checkpoints.’