The Zionist Agenda In A Nutshell: Rename Earth To Israel, Hell or IsraHELL And Let Their Antichrist Rule It

Call it Jewish Communism, Jewish Bolshevism, Zionism, Israel Worship Or Satanism. It is all the same and it is all about control of every aspect of our lives. It is also about mass murder and destroying nations around the world to usher in a One World Hellscape. Everything that is good and beautiful is being turned into evil and unimaginable ugliness. Look around, cities are crumbling and we are not advancing as a civilization. An evil agenda is a cloud over humankind.

The words of Israel’s founding father, David Ben-Gurion, still resonate: the state of Israel is a work in progress and its borders should not be fixed or even defined.

The Protocols Of The Learned Elders Of Zion are said to be fake for purpose to make the Zionists look bad, even if that was true, it seems that a lot of what has been written in the Protocols by whoever wrote it are today coming true! Coincidence? Sure seems like an evil road map to takeover the world to me.

The Protocols Of The Learned Elders Of Zion were first published in Russia between 1897 and 1903, translated into multiple languages, and disseminated internationally in the early part of the 20th century.

Ahmad Nasser, Secretary of PA Parliament, as interviewed on PA TV:
Nasser: “Israel is not deterred from anything. Israel was established on the basis of theft. Israel, the State of Israel, is the Satan’s offspring, a Satanic offspring. Israel was founded on theft from the first moment. It was founded on the basis of robbery, terror, killing, torture, assassination, death, stealing land and killing people. On this basis, Israel was founded and will continue this way, never able to exist because its [Israel’s] birth was unnatural, a Satanic offspring, and cannot exist among human beings. . . . Only in this way can Israel exist. It is not capable of existing naturally as other nations in the world.”

Interviewer: “The very existence [of Israel] is unnatural, is not logical. The root, the root itself is rotten.”

Nasser: “This state is based on racism, biblical concepts, death, killing and destruction ….”

Nasser (on the exchange of 400 Arab prisoners for one Israeli and three bodies of Israeli soldiers): “. . . We see that Israel is trying to delude the world, and delude the Arabs and the Palestinians psychologically – that one Israeli will be exchanged for a thousand Palestinians. Meaning – Israel is interested in planting among the Palestinian, the Arab or the world the concept of value – the value of a Jew and the value of an Arab. But it is not true…” [Interrupted]

Interviewer: “This concept appears in The Protocols of the Elders of Zion, that they [the Jews] are at a high level [of existence] and the rest are at a low level.”

The Holocaust is a tool that is used to justify killing and doing evil to others these days. There is even a Holocaust Industry and lots of movies made. Since this is the case now more and more people are starting to realize something is wrong here and are doing their own research. The Holocaust is very questionable to me and scientifically could not have happened as we were feed and why does Hollywood not make movies about Stalin and his Bolshevik Jews that were the biggest mass murders in history? Because Hollywood is mostly Zionist propaganda.
Meet Stalin’s Bolshevik Jews

A *Holocaust Anniversary to Commemorate in July
Let us observe memorials to the forgotten holocausts
By Michael Hoffman
www.RevisionistHistory.org 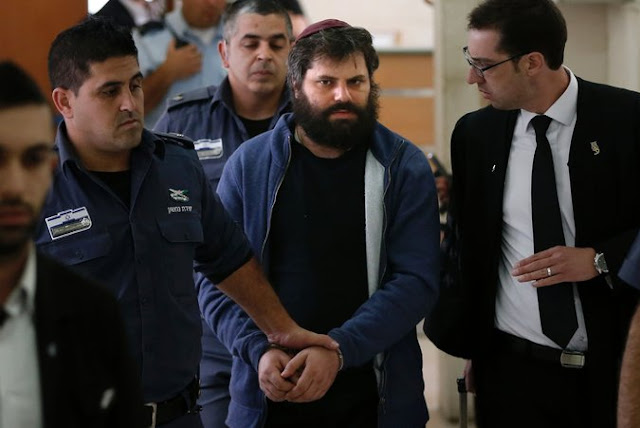 Yosef Haim Ben-David (center) with police and defense attorney
July 2, 2014: Israeli settler Yosef Haim Ben-David and his two nephews kidnap and burn alive a 16 year old Palestinian youth, Muhammad Abu Khdeir, in East Jerusalem.
On July 1 the three Israelis had attempted to kidnap and murder an 8 year-old Palestinian child in East Jerusalem, but the boy’s mother heroically fought off his three would-be abductors.
What happened in Palestine is nothing new. During the Middle Ages Ashkenaz Judaics kidnapped and ritually murdered Christian children, as documented by Israeli historian Ariel Toaff, the son of the Chief Rabbi of Rome, in his banned book, Blood Passover. 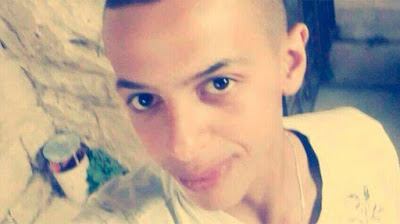 According to historian Sergio Luzzatto, Blood Passover “is a magnificent work of history…Toaff holds that from 1100 to about 1500, in the period between the First Crusade and the twilight of the Middle Ages, some crucifixions of Christian children really happened…Neither in Trent in 1475 nor in other areas of Europe in the late Middle Ages were the Jews always innocent.” 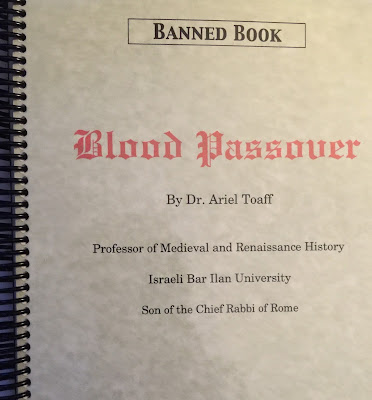 “My research shows that in the Middle Ages, a group of fundamentalist Jews (had) a passion for revenge that in some cases led to responses, among them ritual murder of Christian children…I believe there is no room for doubt in terms of historiography…”
—Ariel Toaff, Bar Ilan University
One of the victims was an infant, Saint Simon of Trent. All pontiffs since Pope Paul VI have suppressed his memory and the testimony by Catholic witnesses of his victimization. All images and memorials commemorating St. Simon have been removed from Trent, Italy by order of the modern Church of Rome.
The memory of the holocausts perpetrated against our children are suppressed. This is considered a positive moral act in the West today.
Only one “Holocaust” is permitted to be recognized and remembered. It is considered a hate crime to recall what Talmudists have perpetrated against Christians, or the Israeli holocaust against Arabs.
*Holocaust: burnt offering. From the Latin, holocaustum, derived from the ancient Greek ὁλόκαυστος ‎(holókaustos).
_____________
Michael Hoffman’s Truth Mission is made by possible by donations and the sale of his publications and recordings.
_____________

The greatest lie ever told – The Holocaust – 2015 Documentary HD

So way before WW2 and to this day we have a group of people that seems to enjoy murder and death. I am not saying all Jews are responsible for this! That would by morally wrong! There are Rabbis and Jews that denounce evil even in Israel when they see it and some have even lost their lives doing so. I want to live in a world free from evil, war and mass murder. Years ago I stopped watching TV and movies except for an occasional classic that I don’t view as propaganda. Let’s face it, if you watch TV, read magazines, newspapers or watch movies you are being manipulated and brainwashed to believe false history and reality. You are pushed to hate a group of people. This control of the media has been going on for along time. It was used against Germany and even before that. It is easy to create an enemy, even by a cartoon.

Education for Death: The Making of the Nazi (1943) – WW2 Animated Propaganda Film by Walt Disney

Video: Communism/Jews have taken America over! Look around its true

MANIFESTO OF THE COMMUNIST PARTY By One World Order Jews KARL MARX & ENGELS Read It On PDF.

The Ten Planks of the Jewish Created Communist Party – Shows The USA is Occupied. Same thing happening around the world.

How Israel/Zionism rule the world

I have to point out Israel, Zionism and Zionist Paid Off Politicians were reportedly involved in doing the 9/11 False Flag Attacks. Same with the Kennedy murders.

NOT for the immature! Zionist Antichrist will rule the NWO