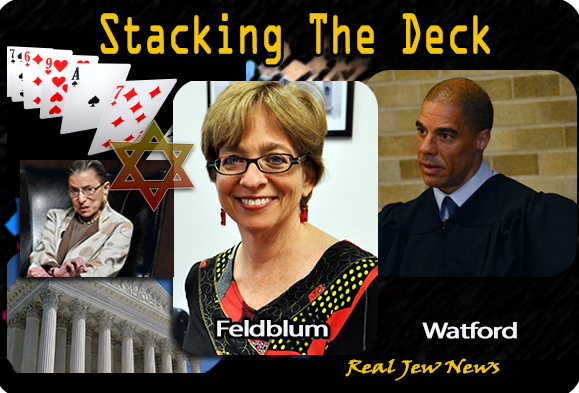 WITH THE DEATH OF ANTONIN SCALIA, Jewish hopes for total control of alllegislative powers arise.

And this is what the Supreme Court has become: A Jewish venue for legislating from the bench.

If abortion could not be legalized by Congress, or if it was not possible to make homosexual ‘marriage’ a law by the states…the Supreme Court does it for us and against the peoples’ will.

Using the power of ‘judicial review,’ new laws are imposed simply by redefining them as a constitutional right.

Scalia’s dissenting opinion on homosexual ‘marriages’ tells the woeful story (and a prophecy) of America’s future under a ruling elite:

“Today’s decree says that my Ruler, and the Ruler of 320 million Americans, is a majority of nine lawyers on the Supreme Court.” 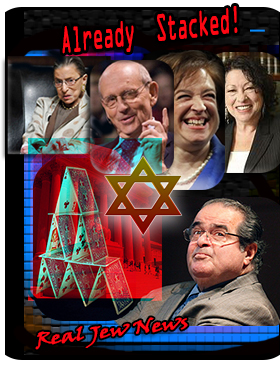 Four Jews already make up the tenor of SCOTUS.

And now with Scalia’s replacement under Obama’s jurisdiction, (READ: Jewry’s jurisdiction, since the vast majority of Jews are Democrats), Jews will seize the power of the highest court to concoct ‘constitutional rights’ where none exist.

As it happened with Sotomayor, (her mother, a Sephardic Jew), Jews work behind the scenes to influence SCOTUS appointments.

Now being considered as Scalia’s replacement by Jew-owned Obama are Chai Feldblum, Jewish lesbian commissioner of the Equal Employment Opportunity Commission, who helped shaped Obama’s embrace of the LGBTQ agenda.

Also in the running is Paul Watford, former law clerk for Ruth Bader Ginsburg. It’s IN our faces.

For with Kagan and Breyer boasting of their Jewish identities at the 2014 General Assembly of the Jewish Federations of North America, the theme being The World Is Our Backyard, any hope of change in Jewmerica gets quashed at our Jew-ruled country’s highest bench.

Guaranteed is that any reforms Trump puts forth will be killed by the Jew judges at SCOTUS. It’s a Jewish shadowland surrounding our nation’s highest court.

One must ask, why isn’t Trump or any candidate calling for term-limits of SCOTUS justices?

Is it because it’s where Jewry draws a thick red-line beyond which no candidate dares to go?

THE OUTCOME OF THIS BATTLE will set the stage for an array of Jew-inspired issues for decades to come:

Immigration, gun rights, campaign finance, health care, affirmative action, homosexual rights and abortion…all in the hands of the Jewish RULERS that Scalia warned us against.

Methinks Antonin Scalia is now turning over a ‘dissent’ in his grave. Read More

Obama nominates Jew Merrick Garland to Supreme Court. Who would have guessed?!

Commentary by Dr. Patrick Slattery — President Obama has nominated D.C. Court of Appeals Judge Merrick Garland to fill the Supreme Court post made open by Justice Scalia’s sudden death. I will leave a debate on Garland’s judicial philosophy to others, and concentrate on what this does to the ethnic make-up of the court. Garland has a Jewish mother, was raised Jewish, married a Jew, and as you can see from the Jerusalem Post article below, is accepted as a Jew. He joins Elana Kagan, Stephen Breyer, and Ruth Bader Ginsburg as the fourth Jew on the court. (There are some indications that Sonia Sotomayor is part Sephardic, but she was raised Catholic.)

If confirmed, the high court would have four Jews, three European Americans (John Roberts, Anthony Kennedy, and Samuel Alito), one black (Clarance Thomas), and the Hispanic Sotomayor. All of the non-Jews are Catholic, so the court will continue to not have a single representative of America’s Protestant majority.

And now for the gloating from the Jerusalem Post:

If confirmed, Garland would be the fourth Jewish justice on the nation’s highest court. Read More