Passenger Nick O’Donoghue was on board an EasyJet flight flying back from Austria to Cork when his fellow passengers began to point to a strange phenomenon outside the aircraft.

Mr. O’Donoghue told to the Dailymail: I was gazing out the window and was amazed to see a figure in the distance in front of us and then as we flew closer the bizarre shape of a human-like figure walking along the clouds appeared. 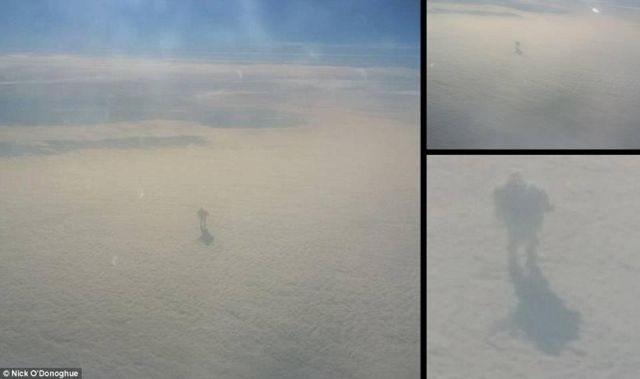 Despite the figure was a bit away in the distance, I was able to watch the shadow figure for about two minutes and took some images of the strange phenomenon before then the aircraft slowly passed it.

To me, the shadow figure looks like a robot-like man or Michelin man but honestly I have no idea what it was, maybe it was just a rare cloud formation, said Nick.

Did Nick captured a rare natural sky phenomenon at 30,000ft or he witnessed something extraordinary, something from another world, that goes beyond the human capacity to understand what it could be?

Note: In the last enlarged and enhanced image of the shadow man, a human face is clearly visible.